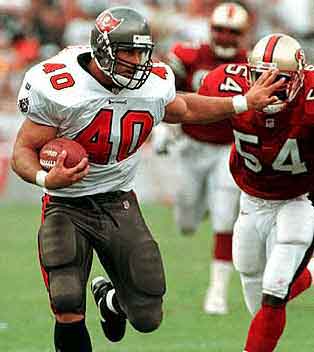 The career of Bucs fullback and bruiser Mike Alstott may be over, as today the team placed the veteran on injured reserve with a neck injury.  The announcement was made at an emotional press conference in which Alstott, the Bucs all-time TD producer, said “It is what it is. The facts are the facts,” I can’t put on the helmet and jersey this year.”

There were rumors that Alstott would simply announce his retirement from the game on Thursday, but the team and the fullback stopped short of that .  He simply shrugged off several retirement questions, saying that in time he will answer them.  The injury that has stopped the backs season is not the one that required surgery back in 2003 that first put his career in jeopardy.  That neck injury knocked him out after four games and led to concerns that his NFL career was over. Instead, the Buccaneer fan favorite came back and put together two solid seasons in 2005 and 2006.

If this is the last we see of Alstott, he has put together one of the more memorable careers for a power back.  His career totals include 5,088 rushing yards, 305 receptions, 71 total touchdowns and an additional seven scores in the postseason. In 2002 as the Buccaneers won Super Bowl XXXVII, Alstott rushed for 100 yards and four touchdowns, including one in the Super Bowl win over Oakland. He is only the second player in franchise history to pass the 5,000-yard rushing mark.